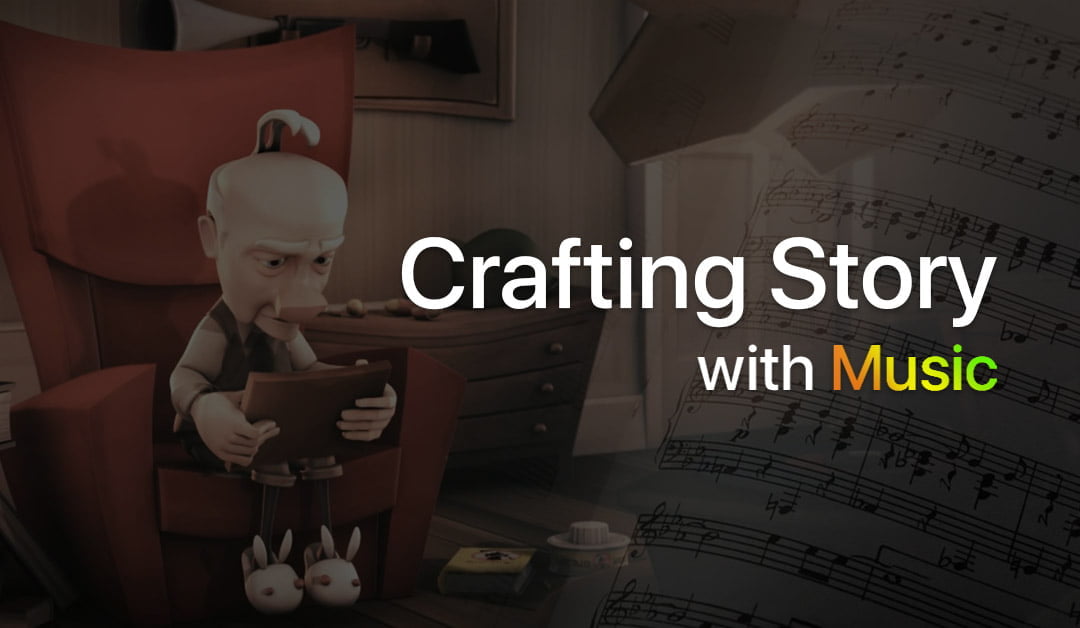 Here’s what you’ll be able to achieve:
1) Reduce scenes/actions/animation that’s irrelevant or repetitive.
2) Add in new interesting animation or action scenes.
3) Better timing for animation reference.
4) Produce a film that is comfortable to watch.
5) Your storytelling is more seamless and memorable.

Music is a universal language used to convey emotional messages, especially in storytelling. Having the right music is not only able to convey an emotional message to our audience but also to guide them ‘When’ and ‘What’ to feel at each point of our story.

One of the best examples is from this classic episode of Tom & Jerry, The Cat Concerto. My personal favourite.

The entire music and story blend so well together with the actions and animations. Even without the visuals, we are actually able to tell what’s going on just by listening to the music. The music itself is like a 3-Act-Structure on its own.

Here’s a 3-Act-Structure diagram embedded with a piece of classical music (C Major Prelude by Johann Sebastian Bach).
Try to listen and pay attention to the story progression of the music throughout the 3-Act-Structure.

Take note of the transition at the Trigger Point, The Downfall and Climax. Here’s where the music does its magic. This music alone is able to ‘visualise’ all the key moments of the Story Structure.

Now, I’m not saying that you must use a single piece of music for the entire film, but instead of just randomly slapping sad instrumental music on a sad scene or uplifting music on a happy scene, look for one that can help improve your scene progression.

Here are the THREE elements to look for:

Timing & tempo that suits the phase of your scenes.

Music that contains changes in tone, key, instrument, etc to portray different emotions and chapters. Just like the video example above, where the music is able to enhance the Trigger Point, The Downfall, and Climax.

Music that allows you to visualise movements and actions just by listening to it. Very much like dancing.

If the music can fulfil all the 3 elements above, I refer to them as Music With a Good Rhythm Structure.

For an Animated Short Film, music with a good rhythm structure can help enhance the overall structure of your film. You can use the music to pace the timing of your animation and editing.

Here’s an example of how my team (Dead Pixel) utilised Richard Clayderman’s Csárdás (Originally by Italian composer, Vittorio Monti) for our college graduation film back in 2012, Death In D Minor.

The music choice doesn’t have to be classical music. It’s just so happened that my groupmates and I enjoyed them a lot.

Sometime later, my team did a simple analysis on what are the key elements that help us secure the various awards we received over the years and we also managed to get some insights from the judges. Many talented artists who participated actually produces amazing & professional-quality animation short films too. My team put in an amazing effort and love into this short film but, there is no denying that there’s always room for improvement on the final Production Quality.


Death In D Minor is a short film with a very simple story, but what makes it stands out from the rest?

‘The Rhythm Structure of Music.’

Now, this is not something that can be easily pointed out because it’s not really a technical thing.
The Rhythm Structure of Music that helps us craft Death In D Minor is more of an ’emotional’ thing.
It’s what the audience subconsciously feel when they watch our short film.

After the Storyboarding stage, we proceed to work on the timing of our Animatics edit. Since we are broke students with little to no budget, hiring a composer is not an option for us. So, we look for music from all over the place, hoping to find one that fits our Animatics.

Here are the PROBLEMS we faced during Animatic stage:

1) Our scenes were either too short or too long. It’s inconsistent.
2) Even with the 3-Act-Structure, the tempo and timing are not synchronised with the animation.
3) The scenes and animations feel repetitive and it’s not memorable.

It took us quite a while looking for the right music and we eventually found one after we witnessed the Solar Eclipse, twice.
And the best part is, it KINDA works.

The music tempo and mood matched our scenes but, something is still missing. It just doesn’t feel right. It doesn’t have that adrenaline you get from a rollercoaster ride. So, we decided to take a few steps back and venture on a side quest.

We started doing research on the good ‘ol classic animated cartoons from Looney Tunes and Tom & Jerry on how they use music to orchestrate their story and animation.

Eventually, our little side quest has paid off and we’ve simplified what we’ve learnt into three simple elements.
These are the key elements that create a good Rhythm Structure in music for your storytelling.

1) Timing & Tempo
Timing & tempo that suits the phase of your scenes.

3) Actions
Music that allows you to visualise movements and actions just by listening to it. Very much like dancing.

With a better understanding of how music is used to enhance a story, it’s SO MUCH EASIER to look for the right music instead of just randomly searching and hoping for one that would swipe ‘Right’ on your dating app profile.

Once we have our music locked down, we enhance and edit our Animatics to the Rhythm Structure of Music.

Here’s what we’re able to achieve after:

1) We’re able to remove scenes that are irrelevant and repetitive.
2) We’re able to add in new interesting animations based on what we are able to visualise through the music alone.
3) We acted out the entire animatics ourselves using the music as a guide for animation reference.
4) The whole film feels more comfortable to watch.
5) Story is more seamless and the music makes it easier to remember every single detail of the film.

I hope this article is able to give you some new insight and if you’re still interested to know more, do drop me a message using the Messenger Icon below.